IULA was established in 1913 in Belgium with its headquarters in The Hague, Netherlands, while IULA ASPAC, headquartered in Jakarta, was set up in September 1989 during the 29th IULA World Congress in Perth, Western Australia. 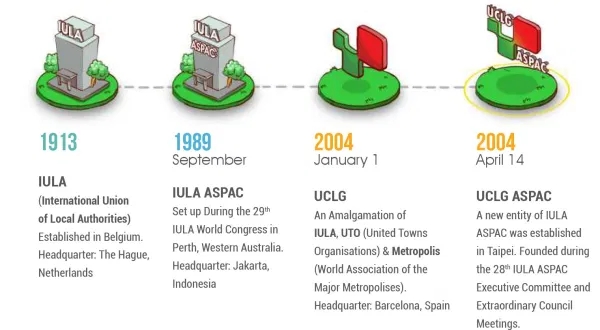 UCLG ASPAC is one of the Regional Sections of United Cities and Local Governments (UCLG), an amalgamation of International Union of Local Authorities, United Towns Organization (UTO), and World Association of the Major Metropolises (METROPOLIS). UCLG was established on 1 January 2004 and is headquartered in Barcelona, Spain.

Following this unification, UCLG ASPAC was established in Taipei on 14 April 2004, as the new entity of IULA ASPAC. UCLG ASPAC is the key knowledge management hub on local government issues in the Asia Pacific region.

UCLG is a worldwide association, and the only local government organization recognized by the United Nations. It nominates 10 out of 20 members of the United Nations Advisory Committee of Local Authorities (UNACLA), the first formal advisory body of local authorities affiliated with the UN.

The Asia and Pacific region is the biggest of the Regional Sections in UCLG with linkages to more than 7,000 local governments. It represents well over 3.76 billion people- making up more than half of the world’s population– and incorporates economically fast developing countries such as China, India, and Indonesia.