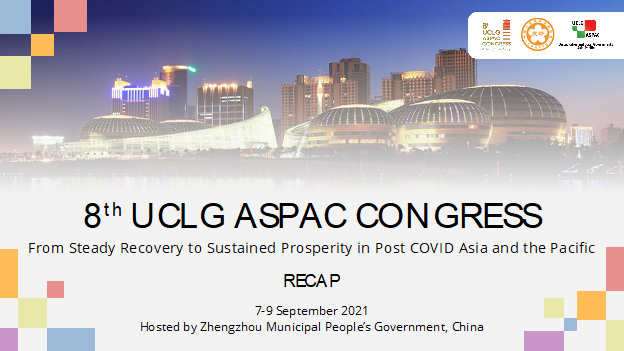 The 8th UCLG ASPAC CONGRESS was successfully held on 7-9 September 2021, hosted by Zhengzhou Municipal People’s Government. This year’s congress theme is “From Steady Recovery to Sustained Prosperity in Post COVID Asia and the Pacific” which aims to accelerate pandemic recovery in sustainable manners through collaborations. The event included executive bureau meetings, council meetings, committee meetings, and thematic side events. Due to travel restrictions, the event was held online but it did not reduce the enthusiasm of participants.

The committee meetings and thematic side events were held on 7-8 September as preliminary events before the congress which was held on 9 September. During the congress, there were opening session, plenary session and closing session that are open for members, partners and public. Meanwhile the executive bureau and council meetings were limited for members of UCLG ASPAC.

At the opening session Ms. Hou Hong, Mayor of Zhengzhou, gave her welcome remarks. She stated that Zhengzhou has always done their best to create openness and collaboration and will continue to do so to expand friendship among members. It is then, followed by remarks from Mr. Jiang Jiang, Vice President of CPAFFC, said that solidarity and cooperation are the only way to fight the pandemic in globalize era. Meanwhile in the next remark, Mr. Ashok Kumar Byanju, President of UCLG ASPAC, promised that under his leadership UCLG ASPAC will strive to become better at assisting others in time of need. UCLG ASPAC will also continue to drive a sustainable path in recovery with focus on recovering the local economy.

Several notable figures also gave their speeches at the opening ceremony. Mr. Bambang Susantono, Vice President for Knowledge Management and Sustainable Development of the Asian Development Bank, stated that we need to ensure that we don’t fall under K-shape recovery. Cities should integrate participatory in urban planning through people-oriented approach. Ms. Armida Salsiah Alisjahbana, Executive Secretary of the United Nations Economic and Social Commission for Asia and the Pacific (ESCAP), also emphasized the importance of participatory and commitments on urbanization for recovery. Cities also should be empowered to tackle the challenges. Ms. Maimunah Mohd Sharif, Executive Director of UN-HABITAT, said that urban prosperity can be achieved through advocacy, digitalization, and cooperation. Mr. Umesh Shrestha, Minister of Health and Population of Nepal, through a representative, asked all members to develop clear strategies to tackle and need to think beyond the Corona Virus Disease to make stronger and healthier cities.

The official adaptation of UCLG ASPAC Manifesto, announcement of photo competition, and cities signing ceremony agenda also took place during the opening ceremony. Dr. Bernadia Irawati Tjandradewi, Secretary-General of UCLG ASPAC, said that the manifesto is focused on the localization of the global agenda. It also includes the plan for recovery as an equal strategy component and will encourage cities and local governments to support the region to build resilient and sustainable development. Mr. Ashok Kumar Byanju, President of UCLG ASPAC, said that the manifesto will guide UCLG ASPAC members in developing policies, programs, and initiatives.

Dr. Bernadia Irawati Tjandradewi, Secretary-General of UCLG ASPAC, in the opening remark before moderating the plenary said that the plenary session is a platform to share experience on actions that have been taken by cities governments.

Mr. Yasutomo Suzuki, Mayor of Hamamatsu City, Japan, shared that the city has taken actions in COVID-19 response ranging in safety and security, economic measures, remote work and services, and promotion of movement. Hamamatsu also will continue to strive to be a smart city and a livable city for its citizen. Mr. Emil Dardak, Vice Governor of East Java Province, Indonesia, highlighted that the best strategy to recovering the economy is to stabilize COVID-19 outbreak. The local governments also have been focusing on social assistance, capacity building, and economic development programs for SME businesses and encouraging young people to do work freelance jobs. Ms. Sheela Patel, Founder and Director of SPARC, conveyed that the pandemic has widened the disparities and inequality gaps. She also mentioned cities that engage with communities will benefit from the relationship. She reminded everyone that in the recovery process, poor and vulnerable people must get the same opportunity. Climate issue was also raised as she reminded that cities might receive climate migrants.

Mr. Lee Hyungjong, Ambassador for International Relations of Daejeon City, ROK, shared the usage of information and technology development in advancing public services in Daejeon. And  Ms. Li Fang, Director of Zhengzhou Municipal Bureau of Culture, Broadcast-TV and Tourism, Zhengzhou Municipal People’s Government, PRC, shared how Zhengzhou integrated its culture with recovery strategies. Great challenges that were experienced by Zhengzhou gave an opportunity for the governments to explore new development in social-economic development.

The session was closed with statements from all speakers on the commitment to continue working on recovery strategic actions and welcomed all future cooperation and collaboration.

The congress was coming to an end, Ms. Hou Hong, Mayor of Zhengzhou, in her closing remark stated that UCLG ASPAC members should work together while holding the UCLG ASPAC’s principle in inclusivity to achieve a fairer and brighter environment. Dr. Bernadia Irawati Tjandradewi highlighted that the congress offers many opportunities, not only between local governments but also with other parties as well. For the past three days, interesting topics were discussed such as climate finance and budgeting, human rights, international cooperation, and SDGs. She also appreciated the initiative to create tourism committee to broaden partnership in accelerating the tourism industry recovery.

At the final closing remarks, Mr. Ashok Kumar Byanju thanked all members, partners, and participants who have participated in the 8th UCLG ASPAC Congress. He hoped this congress could enhance knowledge and experience. He also said that we must continue our best effort for city recovery but we don’t have to do it alone. Through collaboration and cooperation, everything can be possible.

In her inaugural speech video message, Ms. Maimunah Mohd Shahrif stated that cities must step up the implementation of the new urban agenda to achieve urban prosperity in the …

Mr. Boudra as President of UCLG World has realised and seen first-hand how local and regional governments have been struggling to revive economies, reduce mortality, and …

During the opening session of the 8th UCLG ASPAC Congress, Ms. Armida Salsiah Alisjahbana through her video message emphasised how recovery, in all its sense …

During the opening session of the 8th UCLG ASPAC Congress, the Zhengzhou Municipal People’s Government has created a city-promotion video to enliven the the Congress …

As host city, Zhengzhou Municipal People’s Government has installed the 8th UCLG ASPAC Monument as a sign of collaboration and participation to build back better even …

To enliven the 8th UCLG ASPAC Congress and raise awareness of COVID-19’s responses and recovery, a photo competition was organised. It was expected to capture and to raise … 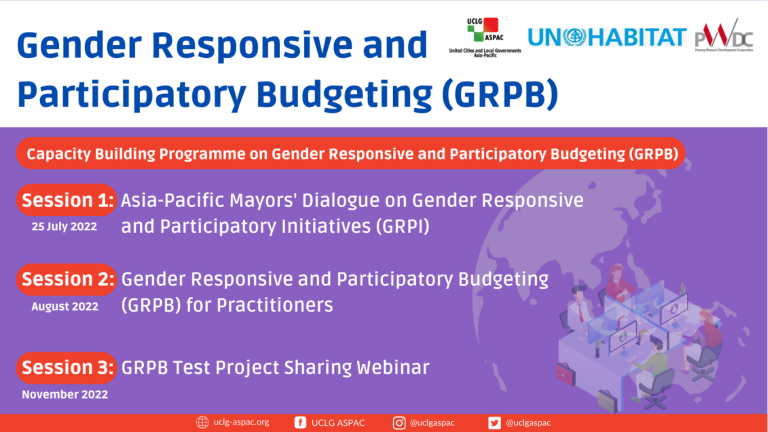 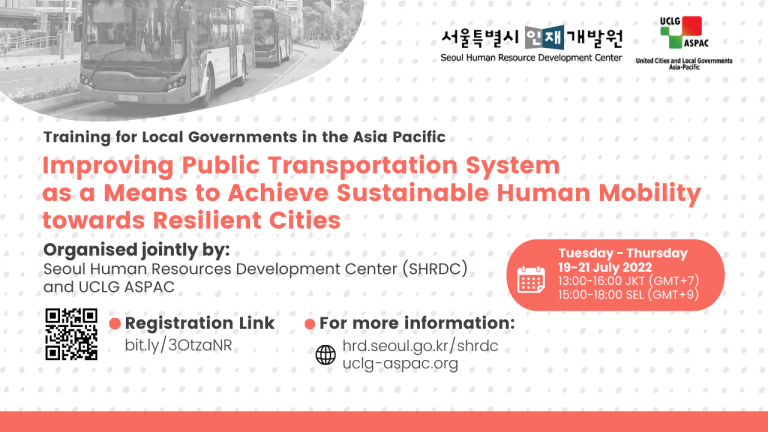 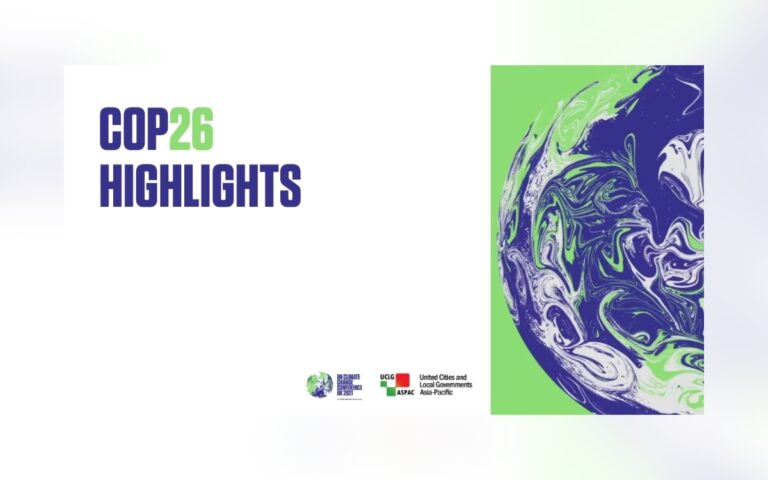