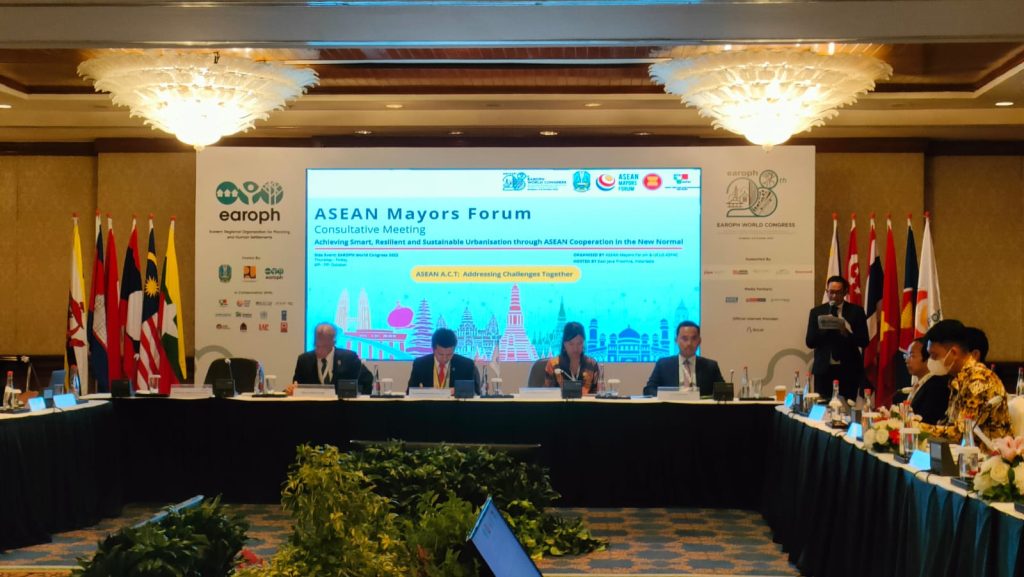 The ASEAN Mayor Forum (AMF) 2022, handled by the United Cities and Local Governments Asia Pacific (UCLG ASPAC) has gone through a continuity action by take part in achieving regional prosperity and collaborative in Southeast Asia region, host it on October 6th-7th, 2022 in Surabaya City, East Java, Indonesia. Followed by 27 Participant including 12 Mayor, 2 Governor, and non-Mayor participant; from Indonesia, Malaysia, Philippines, Cambodia, Myanmar, Laos, Thailand, and Permanent Representative of the Republic of the Union of Myanmar to ASEAN who takes part by join for a live ground forum. The session of the forum then gives the city leaders a platform to contribute and support the ASEAN Cities and Local Government, expected to reinforce knowledge sharing, engagement, and discussion of implementing the New Normal recovery plan and strategy, also to strengthen the cooperation among ASEAN members in accelerating the realization of the transformative urban environment to become a smart cities and enlightened technology for urban resiliency. This forum was a back-to-back event with the Eastern Regional Organization for Planning and Housing (EAROPH) World Congress 2022, under the cooperation with Provincial Government of East Java.

Dr. Emil Elestianto Dardak, as the Vice Governor of East Java, also President of EAROPH 2022/2025 opened the forum. In his speech, he’s mentioned about how the future of the human settlements and current point at issue that happened especially in the rural area then how the government response to faces all of the problems. He also shared about how East Java compared to others cities in ASEAN Countries where its citizens still have a deep connection to the rural culture and the young generation who wander out is not coming back to their hometown after their studies which caused the city loss a regeneration of human resources. For the closing of his opening remarks, he’s hoping for the output of the forum can discuss how to make people live in a comfortable city. Agreeing on what Dr. Emil said, Dr. Bernadia Irawati, UCLG ASPAC Secretary-General hoping that the forum existence could encourage cities in ASEAN to dare to face a challenge and come out with strategic solution, as in collaboration within the community of ASEAN. Therefore, within the discussion of the AMF 2022 could come out with a better solution, that not only beneficial for the capital city.

The first session of AMF come with the “New Normal Recovery Session”, where the delegates from each city able to point out their challenges and solution regarding the topic. Led by Dr. Emil Dardak as the Chair for the first session, the session marks a several issues in ASEAN cities, including pollution, density, public centre, human resources, social protection and security, and the economic sector past pandemic that still affecting domestic activity until now. Concluded from the discussion, problems of each ASEAN cities have similarities, where the role of government representative is needing a heedful handling in also to implement the Sustainable Environment to make each ASEAN city worth living, for the current and the future generations.

Later on, the next day, the forum continues the second session talking about “Smart Cities and Resilience”. Dr. Bernadia Irawati Tjandradewi opened the forum with a short-brieft that they had discussed yesterday, including the economy growth, post covid, food security, adaptive sustainability in urban planning, and so on. The forum led by Ms. Noraini Roslan, President of Klang Municipal Council, Malaysia as the Chair, and Mr Bima Arya Sugiarto, Mayor of Bogor, Indonesia as the Co-Chair. Pointing out several issue and program related to the topic of the second session, some city such as Palu, mentioned several potentials regarding the new concept of mitigation over natural disaster where they’re concepting the new ecoystem and plan to prevent disaster and policy after natural disaster. The forum then addressing on how to collaborate and simplify the challenges towards the challenges and prioritizing services to improving community welfare and public facilities, especially in the midst of digitalization to make it more even. Therefore, the forum come up with a conclusion with the important concept of smart city and why it is hard to implement. The main factor is on digitalization, which means the needs to improve the technology and communication sector is highly prioritize. According to Dr. Wichai Kanchanasuwan, Deputy Mayor of Hat Yai City, Thailand, say that the power of implementing the smart city start on the people itself or human resource, where there will be an exchange communication between them, they can share data, new idea to the development. Another thing related to the collaboration added by the Vice Mayor of Jambi, mentioned the consideration on building collaboration among government and the community so that the smart city can be implemented.

Following up the AMF Consultative Meeting and highlighting the urgency of “Addressing Challenges Together” post-pandemic and realising a sustainable future, UCLG ASPAC as AMF Secretariat, in cooperation with Phnom Penh Capital City Administration, is organising the AMF Summit on 12th-13th October 2022. This AMF Summit 2022 is the continuation of the AMF Consultative Meeting which was hosted by East Java Province back-to-back with EAROPH World Congress in early October 2022. Therefore, in alignment with themes of Cambodia’s ASEAN Chairmanship and responding to the current global issues, the AMF Summit 2022 will elaborate the theme ASEAN A.C.T.: Addressing Challenges Together: “Strengthening ASEAN Collaboration through Accelerating the Implementation of Smart, Resilient, and Sustainable Cities for Transformative Urban Living in the New Normal”. Coming with the theme: Addressing Challenges Together (A.C.T), Cambodia Chairmanship theme has been giving power and inspiration to support and cultivate a strong sense of the ASEAN community. Through the year of Cambodia leadership and referring to its deliverables, it has been proven that the Cambodian Chairmanship has generated peace, and established a peaceful community among ASEAN members and the rest of the world, which maintained ASEAN position as the 5th strongest region in the world. Furthermore, Cambodia has been contributed to accomplish its deliverables in building a strong and inclusive ASEAN Community and continuing to achieve together advancement, which is in line with the core spirit of ASEAN: One Vision, One Identity, and One Community 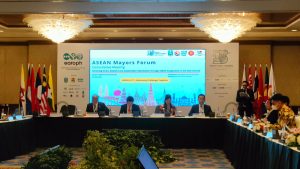 ASEAN A.C.T: Addressing Challenges Together “Achieving Smart, Resilient and Sustainable Urbanisation through ASEAN Cooperation in the 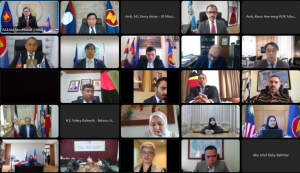 ASEAN Secretariat Special Event: The Briefing by the Secretary-General of ASEAN on the Outcomes of the 55th ASEAN Foreign Ministers’ Meeting 2022 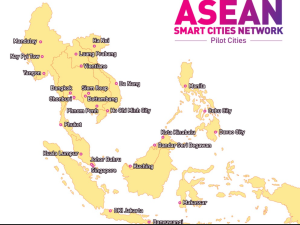